iQiyi, the Asian entertainment streaming leader revealed today six originals from Asia, including its first five new Malaysian Original productions and first Thai Original along with spotlighting 2021 key wins at this year’s Asia TV Forum & Market – all of which will be available to iQiyi users in over 191 territories come 2022.

During their Content Showcase, iQiyi shared some top highlights as part of their inaugural Year-In-Review campaign, such as the doubling of its monthly users in Southeast Asia from the previous year largely driven by premium content from South Korea, China, Malaysia and Thailand. iQiyi’s first Korean production My Roommate is a Gumiho was also crowned their most watched Original of the year with more than 100 million views worldwide. 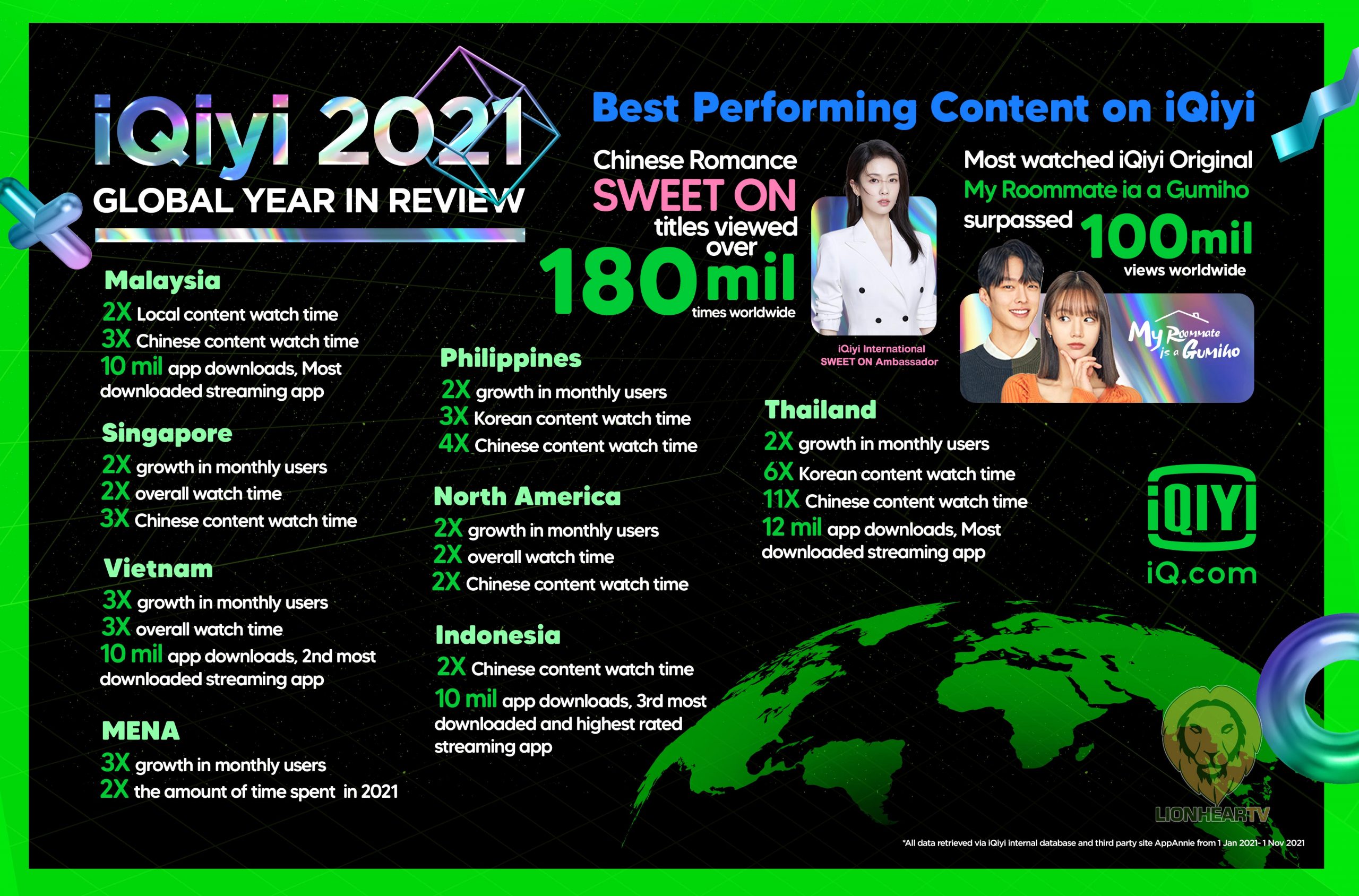 Touching on Chinese content, the streamer remarked on the continued growth in C-content viewing, which was four times that of 2020. Largely contributed by the successful launch of their new Sweet On franchise, which was responsible for 180 million views on the service. As of 31st October, the iQiyi international app has been downloaded over 50 million times1 around the world in 2021, making it one of the most downloaded streaming applications in Southeast Asia.

Qiyi highlighted its strong commitment and investment in unique stories from Asia that is set to intensify in 2022: “As the biggest advocates for Asian entertainment, iQiyi will continue to play our part to uplift the Asian entertainment ecosystem. To cater to our growing popularity among users in this region, we are proud to commit and invest in diverse original content from Asia for next year; on top of our already announced original productions from South Korea and Philippines, we hope these six original series from Malaysia and Thailand will become globally recognised and loved in 2022. We are heartened by our performance this year, which signals that more people are consuming non-English language content,” said Kuek Yu-Chuang, iQiyi’s Vice-President of International Business.

Earlier this year, iQiyi PH acquired the rights to the highly-anticipated global event with the 69th Miss Universe pageant. Bringing the pageant to each and every Filipinos’ homes who are passionate supporters of the event reinforces iQiyi’s commitment on opening up the global scene to the local audience real-time. Thus, the local community has reciprocated iQiyi’s vision of being the most beLOVED Asian app with a record-breaking increase when the daily average users (DAUs) more than doubled on the day of the livestream. Its debut drove a 2.5x increase in VIP members when it premiered in May and became the (top 1) most downloaded entertainment app during the week of the 69th Miss Universe competition.

iQiyi’s continued steady growth in the Philippines is currently being fueled by its latest partnership with ABS-CBN. iQiyi and ABS-CBN’s confluence of vision to provide the local and international audience with high-quality, relatable and inspiring stories has produced the first multi-title Filipino originals for iQiyi in Southeast Asia. The new romance series include Saying Goodbye and Hello Heart that will be available on the app this December.

iQiyi is the most downloaded streaming app in Malaysia accumulating over 10 million mobile app downloads this year. As one of the key Southeast Asian markets with continued growth, iQiyi has joined hands with five leading production houses to bring to life for the very first time to produce five local originals in Malaysia.

My Ofis is a light-hearted sitcom that centers around the challenges of Jasper, a rockstar wannabe who chooses to let go of his rock and roll fame to support his single mother by entering corporate life. Jasper discovers the chaos and crazy antics of ordinary work life, romance and the struggles of office politics but deep down, he still longs for the life on stage. My Ofis is produced in collaboration with Longhouse Films, one of the only production houses in Malaysia with a global network spanning from China, South Korea as well as Hollywood.

Rampas Cintaku tells the story of an undergraduate student desperate to clear his family’s financial debts and intimidations from loan sharks who looks for a quick way to earn cash by working in a nightclub. He encounters a wealthy and seductive business woman and is lured into the world of becoming a sugar baby. The original series is created by highly-experienced and successful MIG Production that has produced more than 8,000 hours of TV series.

In Sori Naik Lori is an original series created by an award-winning production house Tsar Asia. It is a story about a housewife’s instant stardom after her TikTok video goes viral affecting her relationship and adding insult to injury to her husband’s rising insecurity as a lorry driver.

Love You Later is an original romance drama series that explores the time travel of two lovers who are meant to be together but must hold back from falling in love with the wrong version of each other. This series will be produced by Juita Viden, one of the largest and most experienced local and international content providers to Malaysia.

Restu is produced with Infinitus Entertainment, who has had over 30 years of production experience and also produced the highest grossing film of all time in Malaysia. The upcoming original series is about a recently widowed father meeting three marriage prospects but requires the challenging approval of his 9-year-old daughter who is still grieving her mother’s death.

iQiyi is the most downloaded streaming app in Thailand garnering over 12 million downloads this year. On average, Thai users spent twice as long watching all shows on our platform compared from last year, with most notably 20 times more likely to watch Thai content on our platform this year.

KinnPorsche: The Series is about a story of Kinn, a successor to a powerful mafia family who suddenly meets Porsche who saves his life and reluctantly becomes his bodyguard. Both are faced with mysteries and secrets that slowly unfold their past.

The series is directed by Kongkiat Komesiri, an award-winning director who is behind well-known Thai films such as Bang Rajan, Khun Phan and Slice, the latter which won him Thailand National Film Association Awards for his directorial skills in 2010. KinnPorsche: The series will also be supervised by fight choreographer Sumret Muengput who is behind memorable martial arts scenes such as Halfworlds 2 and The Kick.