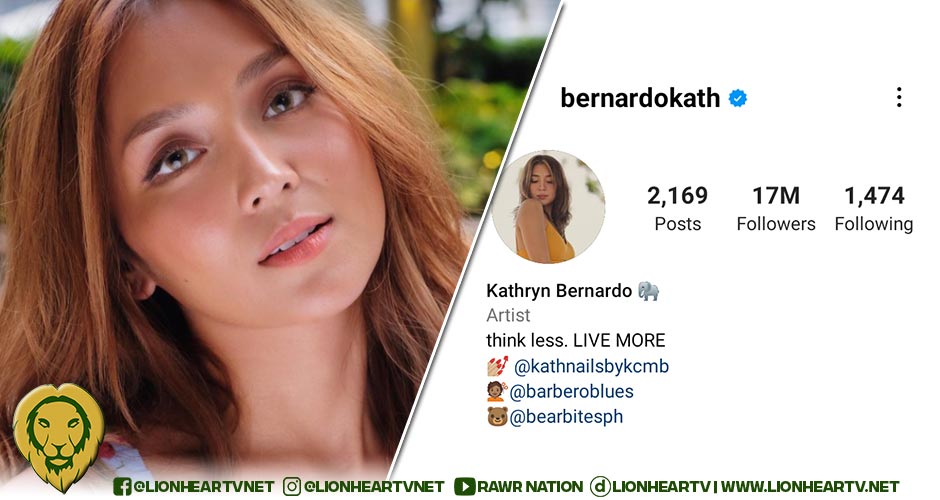 Kapamilya A-list star and box-office royalty,Kathryn Bernardo joined fellow ABS-CBN talents Anne Curtis and Liza Soberano as the only three Filipinos to have more than 17 million followers on the social media platform– Instagram.

Bernardo achieved the feat this week, shortly after Soberano breached the mark. The star of the two highest-grossing Filipino films of all time (Hello Love Goodbye and The How of Us) maintains a strong social media presence with millions of followers, not only on Instagram, but also on twitter (10.4 million followers) and facebook (4.8 million followers).

On YouTube, Bernardo is among the fastest-rising Filipino celebrities with already nearly 4 million subscribers after just more than two years, since her channel’s debut.

Bernardo can draw around 300,000 more followers in just two months. She had over 16.7 million followers based on a March 2022 report. Given that pace, the 26-year-old star is poised to catch up with Liza Soberano, whose followers grew by only 200,000 during the same period.

Soberano is ahead Bernado by merely 70,000 followers. It is worth noting however, that the latter’s surge in followers, may be largely attributed to her current visibility on television.

She and her long-time reel-to-real sweetheart Daniel Padilla are set to return to primetime television on May 16, Monday, via the Mae Cuz-Alviar-directed drama romcom series, 2 Good 2 Be True.

Bernardo and Padilla a.k.a. KathNiel was last seen on a primetime TV series, five years ago, via the fantasy-themed, La Luna Sangre (2017), in which they co-starred with Angel Locsin and Richard Gutierrez.

The upcoming series, which will be their reunion acting project, after 2020s The House Arrest of Us, is notably set to make history, as the first Filipino TV series to stream advanced episodes on the streaming mammoth, Netflix, on May 13.