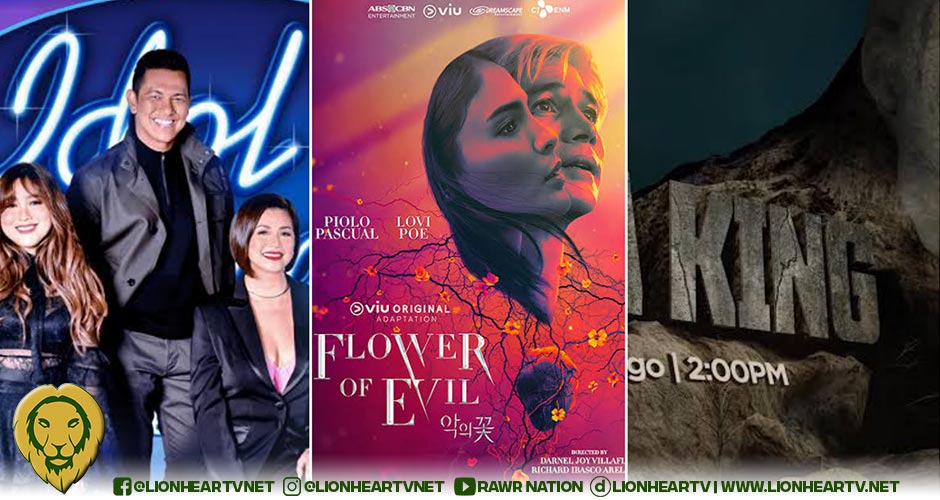 Kapuso programs may have dominated the weekend’s TV rating leader board, but it did not hinder several ABS-CBN shows from taking their respective places in the Top 30 chart.

Two new ABS-CBN shows premiered on June 25: the reality-talent search Idol Philippines, which is returning for its sophomore season, and Flower of Evil, the Filipino adaptation of the South Korean hit of the same title.

Both debuting Kapamilya shows exceeded expectations, considering these aired with still limited free TV coverage. Idol Philippines, which airs on different time slots on A2Z and TV5, managed to top Kapamilya programs with 4.9% on Saturday, June 25, and 3.1% on Sunday, June 26. The reality search has a 7 pm time slot on A2Z, and 8:30 pm and 9 pm time slots on TV5, on Saturdays and Sundays, respectively.

Starring Piolo Pascual and Lovi Poe, Flower of Evil is a collaborative effort between ABS-CBN’s Dreamscape Entertainment and the Asian streaming mammoth, Viu. The series had an earlier release on the streaming service, 48 hours before the series’ free TV premiere. Flower of Evil airs on free TV only via A2Z Channel 11, which explains its lower but already impressive 2.0% rating, according to AGB Nielsen’s National Urban TV Measurement (NUTAM) people data, on June 25.

What made it more impressive is perhaps, Idol Philippines and Flower Evil are in the Kapamilya movie bloc, FPJ Da King, which was the most watched movie bloc on Sunday, June 26.

With a 4.0% people rating, the movie block managed to enter The Top 10. It was way ahead its rival Kapuso movie blocks, GMA Blockbusters and Kapuso Movie Festival, which rated 3.7% and 3.1%, respectively.

It was also ahead Sunday noontime musical variety shows, All Out Sundays (GMA) and ASAP Natin ‘To (ABS-CBN), which posted 3.9% and 2.4% people ratings, respectively.