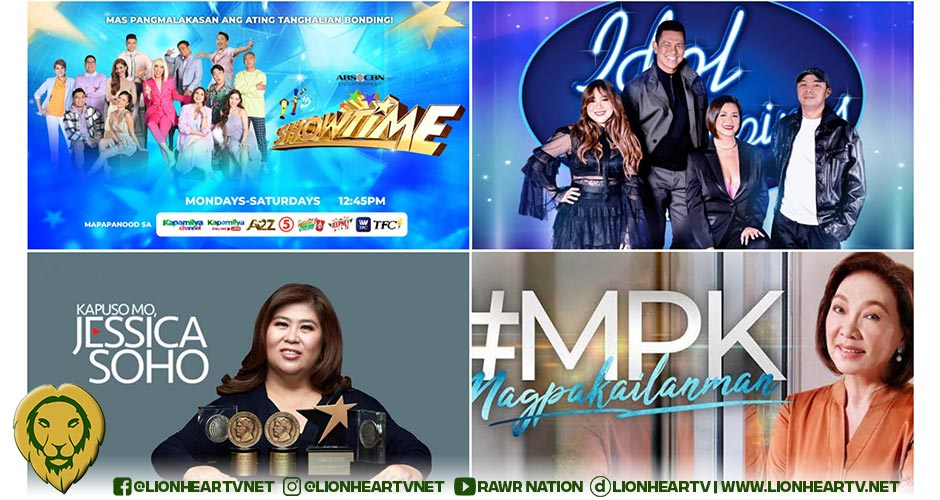 Kapuso programs are comfortably ruling their respective time slots, according to the latest data from rating firm, AGB Nielsen. The number one shows on both Saturday and Sunday, are from GMA Network, while mostly Kapuso shows occupy the rest of the Top 10 most-watched programs’ charts.

The drama anthology, Magpakailanman, reigned supreme last Saturday, July 23, with a 13.2% people rating, while the sitcom, Jose and Maria’s Bonggang Villa, occupied the second spot with a 12.2%. 24 Oras Weekend is the third most watched program, and also the most watched newscast, with 10.6%. Pepito Manaloto and Imbestigador completed the Top 5, with 10.6% and 10.5% people ratings, respectively.

On Sunday, July 24, drama anthology, the news magazine program, Kapuso Mo, Jessica Soho, sits atop the Top 30 chart, with a 15.2% rating, based on the AGB Nielsen National Urban TV Measurement (NUTAM) data. The sitcom, Happy ToGetHer, which starred John Lloyd Cruz, is the number scripted show, with a 12.1% people rating, while the weekend edition of the primetime newscast, 24 Oras, is the highest rated newscast.

Idol Philippines remain the number one Kapamilya show on both Saturday (July 23) and Sunday (July 24), with 5.0% and 4.0% people ratings. On Sunday, the reality-talent show entered the Top chart. It’s Showtime, meanwhile, posted its highest post-ABS-CBN shutdown rating to date, with a 3.6% people rating. The Kapamilya noontime show, notably expanded its free TV presence via TV5, on July 16. FPJ; Da King maintained its high rating, and kept its place as one of the most watched movie blocks on Philippine television.

ASAP Natin ‘To shrunk All-Out-Sundays’ lead to just 0.6%, the slimmest since the former’s home network was shut down in 2020. AGB Nielsen reported the rating of two programs at 3.1% and 3.7%, respectively.