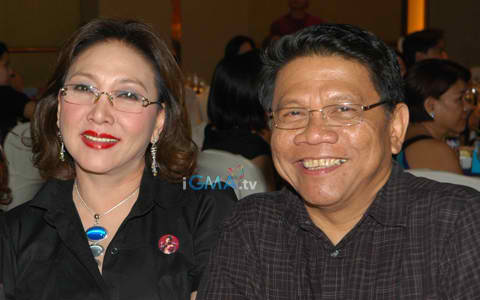 It’s turning out to be a banner year for “24 Oras” anchors Mike Enriquez and Mel Tiangco, two of the country’s most awarded and most credible broadcast journalists.

By striving for excellence and seeking to uphold the highest standards of journalism, Mike and Mel have continued to earn the trust of loyal viewers over the years.

The two remain credible because they have remained reliable, unbiased and true to the GMA News and Public Affairs maxim, “Walang bahid pulitika (Untainted by politics).”

Mike and Mel both walk the talk.

Backed by the country’s most respected news team, Mike and Mel will continue to take “24 Oras” to greater heights by remaining committed to delivering unbiased reporting, comprehensive coverage, and the distinctly GMA brand of “Serbisyong Totoo” that the Filipino viewers deserve.

Mel Tiangco, GMA Kapuso Foundation’s Executive Vice President and Chief Operations Officer, recently garnered the Communication Excellence in Organization or CEO Excel Award for Excellence in Corporate Foundation for her “effective use of communication strategies while at the forefront of various special projects and sustainable programs for the underprivileged.”

The award was given by the International Association of Business Communicators (IABC) – Philippines.

The GMA News and Public Affairs has always been steadfast about helping the less privileged and marginalized, not through politics but through the honest-to-goodness hard work of the GMA Kapuso Foundation.

The COMGUILD has also recently named Mel as its first ever Hall of Fame Awardee for winning its “Most Outstanding News Presenter” award for three consecutive years.

The COMGUILD Awards’ panel of judges is composed of heads of Mass Communication departments of many universities in the country.

She was also honored as one of the “Women of Substance” by People Asia last September.

As a boy, Mike Enriquez aspired to become a priest.

With a view of broadcast journalism as a vocation, Mike Enriquez provides his audience with a brand of public service that goes beyond the newsroom — via the public affairs TV program “Imbestigador” (which recently marked its 10th anniversary) and the radio program “Saksi Sa Dobol B”.

“Imbestigador” is widely regarded as the country’s most credible investigative program, and it has taken investigative reporting to the next level by providing tangible and immediate solutions to ordinary Filipinos, many who are victims of injustice and who have lost hope.

On radio, Mike, who is GMA Network’s Senior Vice-President for Radio, continues to host “Saksi Sa Dobol B,” the popular morning radio program on DZBB, which airs from 6 a.m. to 10 a.m. from Monday to Friday, and features a one-hour newscast that is broadcast nationwide.

He also remains at the forefront of GMA’s radio expansion program, which saw RGMA expand from four stations in 1995 to 27 stations found in all of the country’s major cities.

One of the mainstays of GMA News and Public Affairs, Mike is a recipient of the Best News Presenter at the Asian Television Awards in Singapore. This month, he also received an award for Best Television Host from the anti-crime organization Volunteers Against Crime and Corruption (VACC).

The Rotary International District 3780 has also awarded Mike for his “significant contributions in public service, business, professions, and social and economic development that benefit the nation and communities.”

People Asia has included him in its 2010 “People of the Year” list.