Mark “The Filipino Wrecking Machine” Muñoz returns inside the octagon after suffering an elbow injury to face Chris “The All-American” Weidman on UFC on Fuel TV 4 live via satellite, Thursday, on Balls. 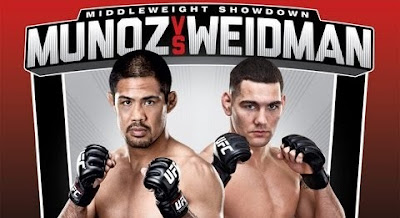 This is Muñoz first fight since he picked up a fourth consecutive victory in a bout against Chris Leben. He was scheduled to fight Chael Sonnen but the severity of his injury forced him out of his bout. Now, the Filipino Ultimate Fighting Championship (UFC) fighter is back in action, determined to be the ultimate contender for the UFC middleweight title.

But Weidman won’t be grappled down easily. The undefeated “All-American” will try to make excellent use of his reach advantage. He will use his jabs which will enable him to be outside the range of Muñoz’s takedowns.

Find out who will rule inside the octagon on UFC on Fuel TV 4: Muñoz vs. Weidman this Thursday (July 12) at 8:30 a.m. live on Balls. Also watch part three of his special three-part documentary on “UFC sa ABS-CBN: Mark Muñoz, The Ultimate Pinoy Fighter” on Saturday (July 14), at 11:30 p.m. on ABS CBN.

Always tune in to Balls Sky Cable ch 34 and be updated with the biggest happenings in the world of sports. Balls channel is available on SkyCable Platinum, SkyCable Gold, SkyCable Silver and over 200 quality cable operators nationwide. Visit the ABS-CBN Social Media Newsroom (SMN) at www.abscbnpr.com for the latest updates, photos, videos, interviews, and presscon podcasts. Follow @abscbnpr on Twitter and ‘like’ it on Facebook athttp://facebook.com/abscbnpr.