Star Records levels up the ‘E-Heads experience‘ for music fans across generations and slates a once-in-a-lifetime gathering of the country’s best rocks bands and solo artists to celebrate the timeless music of the iconic Filipino pop-rock band The Eraserheads via “The Reunion: An Eraserheads Tribute Concert,” which is set to happen on July 27 (Friday), 5pm, at the Trinoma Activity Center. 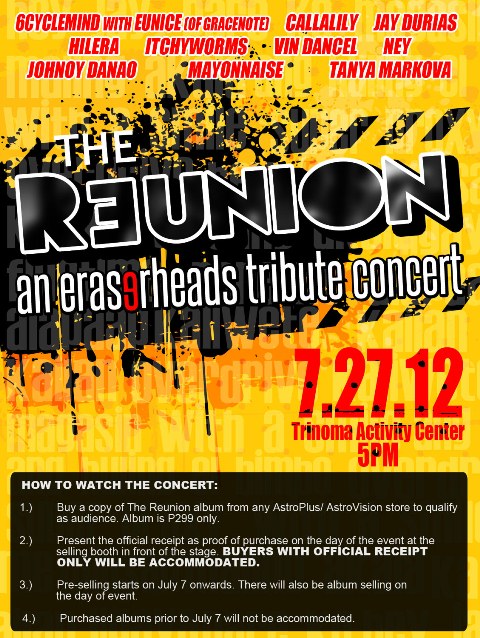 Under the production of Star Records, “The Reunion: An Eraserheads Tribute Concert” is a pays homage to the accolade priceless contribution of the band to the Philippine music history and to the country’s culture as a whole. The event is eyed to be a celebration not only of the generation who grew up to the music of The Eraserheads but also to the youth of today who are discovering the greatness of the band that revived Pinoy rock in 1990’s.

The concert is exclusive to fans who will buy the “The Reunion: An Eraserheads Tribute Album” in various AstroPlus or AstroVision stores during the set pre-selling period that is from July 7 to July 27. Albums will also be sold on the day of the event. To qualify as audience, the album buyer must present the official receipt as proof of purchase on the day of the concert. Buyers with AstroPlus/AstroVision official receipts only will be accommodated. Purchased albums prior July 7 will not be accommodated.

Meanwhile, aside from serving as a concert pass, “The Reunion” tribute album also serves as a raffle ticket to Star Records’ “Soundtrip to Roadtrip Promo,” wherein fans get the chance to win a Chevrolet Spark just by purchasing the album at selected SM, Astro, and Odyssey Music and Video stores. The promo runs from May 14 until August 3. Also part of ‘The Reunion’ promo is the popular clothing line Dickies.

“The Reunion: An Eraserheads Tribute Album” is still available on record bars nationwide for only P299. Digital tracks can now be downloaded via www.mymusicstore.com.ph.

Relive the imortal hits of The Eraserheads and don’t miss the highly anticipated “The Reunion: An Eraserheads Tribute Concert” on July 27, 5pm, at the Trinoma Activity Center.