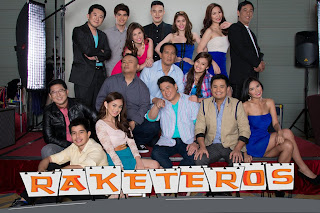 Distributed by Star Cinema, “Raketeros” is set to bring back on the big screen the hit comic tricks and riots of classic Filipino comedy that will truly captivate the hearts of young and young-at-heart moviegoers.

From a simple favor of their rich ‘kumpare’ (played by Joey Marquez) who asked them to deliver an expensive gown that will be used by their god daughter, a series of hilarious mishaps suddenly puts them and their task in jeopardy. When everything seems to be going down, how will the ‘raketeros’ rescue each other?