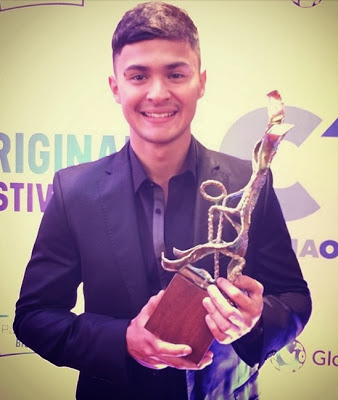 “Galema” star Matteo Guidicelli shares his first ever acting award not only to his fans, but also to all those who questioned his knack for acting.

“I dedicate this recognition to my family, all the fans who remained loyal to me and even to all the haters who thought that this won’t happen,” said Matteo who was recently hailed by 2013 Cinema One Originals Film Festival-Currents Category as Best Actor alongside co-actors Joseph Marco and Rayver Cruz for their indie film “Saturday Nights Chills.”

“Before, I felt that I’ll just get awards in racing and triathlon. But dreams really do come true if you love what you’re doing and work hard for it,” shared Matteo who is better known now by afternoon TV viewers as Morgan, the love interest of Galema (Andi Eigenmann).

Because of his award, Andi’s leading man admits that he is more inspired to work better for their Kapamilya Gold drama series.

“Aside from Zuma’s (Derrick Hubalde) action scenes, the audience should watch out for Galema and Morgan’s budding romance,” he said.