After a fun and exciting competition run, Philippine Normal University-Manila (PNU), University of the Cordilleras (UC-BCF), and Bataan Peninsula State University (BPSU) emerged as the top winners in the EU Whiz Online Competition, the “My Space, My Rights” video competition, and the “Green ECO I See” digital art competition respectively at the recently concluded EU Whiz: Filipino Youth of the FEUture. 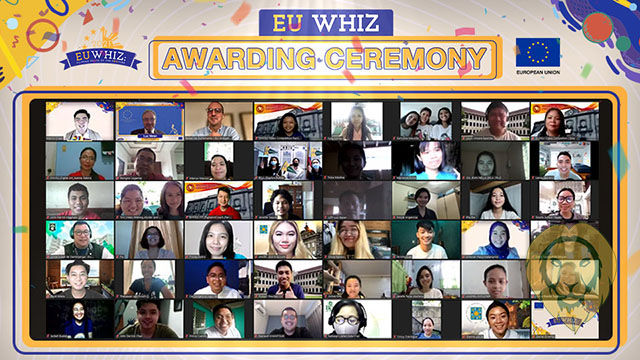 A total of 1,132 students from 146 colleges and universities all over the Philippines participated in the three main competition categories–the biggest turnout in the history of the EU Whiz since its inception in 2006.

“I have made the engagement with youth one of my priorities. I am confident that all the EU Whizers will become ambassadors of our partnership and friendship. Kudos to the winners and we are looking forward to engaging further with you,” said EU Ambassador to the Philippines Luc Véron.

“Conducting this year’s EU Whiz on the digital platform has allowed us to broaden our reach and discover more skillful and talented young Filipinos than ever before. Despite the challenges presented by the pandemic, these Filipino youth were able to utilize their inherent knowledge and creativity to advocate for key issues such as the need for green economy and youth rights. All these showcased the relentless spirit of the Filipino youth.”

Apart from the annual conduct of the inter-collegiate competition, the Delegation looks to build a community of EU Whizers who will continue to use their talents and skills to promote a better understanding of the shared EU and Philippine values.

“This is exactly what we at the EU strive for—to offer a platform for the youth who inspire positive change in the world. We hope to create a community of passionate young individuals and nurture them to become advocates and champions of tomorrow.”

The panel of jurors for the digital art and video competitions were composed of well-known and accomplished creative professionals including Mr. Dan Matutina, Ms. Anina Rubio, Mr. Elvert Bañares, and Ms. Sandra Aguinaldo.

The EU Whiz Online Competition was also supported by the Commission on Higher Education, the Philippine-Italian Association, and the Embassies of the Czech Republic and Hungary in the Philippines.