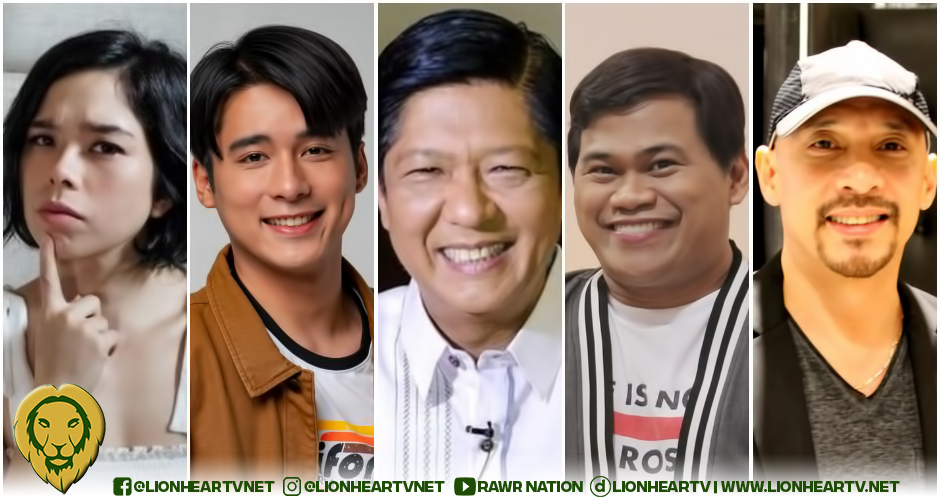 Talent manager and sometimes actor Ogie Diaz was disappointed by Marcos’s withdrawal, saying that it was his chance to defend himself from controversies against him.

Young artist JC Alcantara also stressed that it was an opportunity for Marcos to explain his plans for the Philippines if he becomes President. He also implied that excuses do not make any aspiring leader good.

Filmmaker Antoinette Jadaone and award-winning actor Elijah Canlas were not even surprised by Marcos’s refusal to do the interview.

Meanwhile, some celebrities consider it an act of “cowardice.”

He also ridiculed the presidential aspirant as he was known to attend weddings.

Gabe Mercado was skeptical of Marcos’s valor as President if he could not simply present himself to Soho and Commission on Election (Comelec) Commissioner Rowena Guanzon.

Yung tiger of the north niyo.

Theater actress Gab Pangilinan agreed that Marcos was a “coward.”

Singer Saab Magalona shared what her reaction would be like.

Imagine applying for a job and skipping the interview pic.twitter.com/wUMQVdqHX7

Atty. Victor Rodriguez, Marcos’ chief of staff and spokesperson, said in a statement on Saturday, January 22, that the reason for the refusal was because the award-winning broadcast journalist was “biased.”

“The reason why Bongbong Marcos decided not to join the Jessica Soho show is founded on our belief that the hostess of [the] said popular talk show is biased against the Marcoses.

“Therefore, we believe her questions will just focus on negativity about BBM which the UniTeam dislike and will not subscribe as it hopes that the discourse in any forum about this coming elections must focus on how the aspiring presidents will solve our country’s lingering problems caused by the COVID-19 pandemic and what their plans are for our country to roll up from economic stagnation.”

Rodriguez noted that the interviews should be expected to have candidates present their programs.

“These and other equally important aspects of an aspirant‘s preparedness to lead, ability to govern, and capability to be president cannot be tested by his mere appearance on a show that has been perceived by us and our supporters as having previously displayed a preconceived judgment against the Marcoses,” he said.

“We will continue with our way of communicating direct to the people in so many equally significant shows, platforms, and forums where all the attendees are allowed to present their visions, plans, and platforms freely, unfiltered and unhindered by any biases.”

However, actor Bart Guingona pointed out that it is Marcos’s way of invoking the 5th amendment—the one invoked by criminals.

Marcos’s camp confirmed that BBM would instead be interviewed by Boy Abunda in ABS-CBN’s upcoming presidential interviews to be aired next week.