Gargantuan Kakampink crowd flocked to the Leni-Kiko People’s Rally in Pasay City is the biggest one yet that the Tropang Angat has since the beginning of the campaign season. 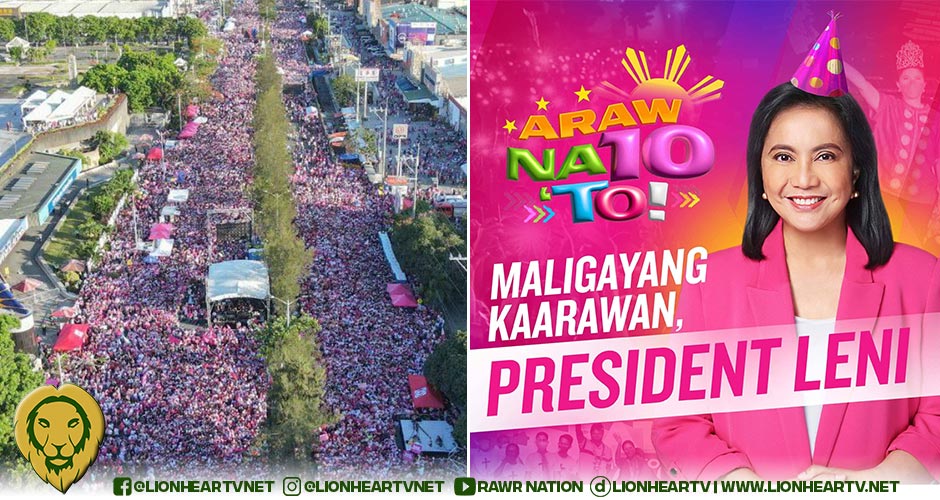 As far as crowd size is concerned, the crown no longer belongs to Pampanga. Pasay City has a record-breaking 412,000 crowd filled some three kilometers of Diosdado Macapagal Boulevard. Organizers said this is the biggest crowd that the Tropang Angat has mustered since the campaign season began in February.

The Pasay people’s rally came on the heels of the success of CEBOOM, the second Leni-Kiko rally in the province of Cebu, which attracted at least 150,000 Cebuano Kakampinks in attendance.

Many ‘firsts’ made it the historic People’s Rally.

It notably featured several new faces on the Kakampink campaign trail. Superstars Vice Ganda and Regine Velasquez made their first appearances at a Leni-Kiko rally. The event also saw Vice Ganda’s official endorsement of VP Robredo as President. Many live attendees and netizens, however, wondered why the comedian-host never raised Pangilinan’s hand.

More than 60 stars are invited to either talk or perform on stage. Several 2000s and current OPM bands kept the crowd ecstatic with their respective hit tracks. The biggest surprise among these bands, however, are APO members Jim Paredes and Buboy Garovilio, who still graced the event amid the absence of their third member Danny Javier. Multi-awarded stars Angel Locsin, and Cherry Pie Picache, graced the event with their presence. John Arcilla, who inspired the crowd with a rousing and impassioned speech, while Gary Valenciano rendered a heart-rending performance of the FPJ’s Ang Probinsyano anthem, Ililigtas Ka Niya.

A video featuring movie queens Kathryn Bernardo officially endorsing VP Robredo as President and Senator Kiko Pangilinan as Vice President debuted as part of the program. The Diamond Star Maricel Soriano also went up to the stage and pleaded for the crowd to choose VP Robredo.

Regine Velasquez-Alcasid and her husband Ogie Alcasid were also first-time guests. The couple reunited with their Sobrang, Okey Pare (S.O.P.) co-star Janno Gibbs, also a first-time guest during the event.