The election results “proved” that majority of Filipinos would like another Marcos to be in power. 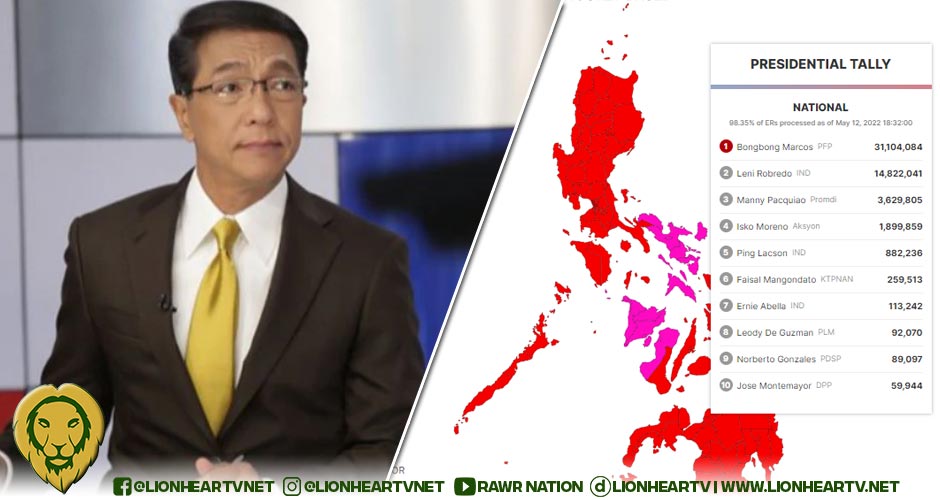 In an episode of his radio program Ted Failon at DJ Chacha sa Radyo5, Failon urged Filipinos to “move on” for the sake of democracy.

It is also the time to be more vigilant now that there is a new set of Philippine government officials.

To those grieving over their candidates’ loss, Failon assured them that it is fine.

Former senator Ferdinand “Bongbong” Marcos Jr is about to have a landslide victory against outgoing Vice President Leni Robredo. With over 30 million votes compared to his opponent’s 14 million, he is poised to succeed Pres. Rodrigo Duterte.

However, a majority of the VP’s supporters refused to accept that she lost. Several protests were organized nationwide following the partial and unofficial election results.

The integrity of the result was questionable, according to Kontra Daya Danilo Arao. He even cited the various cases of alleged fraud and irregularities that marred the electoral exercise.

“Comelec should make an accounting of all its transgressions, and answer decisively why, for example, it refused to extend voting hours through the long lines and delays are not the voters’ fault,” he said.

There was also a belief that a “mass deception” was orchestrated by the Marcoses to condition the minds of millions of Filipinos.

“A possible win based on a campaign built on blatant lies, historical distortions and mass deception is tantamount to cheating your way to victory—and this is not acceptable,” claimed the group Campaign Against the Return of the Marcoses and Martial Law (Carmma) in a statement.