Menu
Search
The ABS-CBN Philharmonic Orchestra held a gala concert entitled A Symphonic Serenade to present itself to representatives from various companies and ad agencies recently at the Mandarin Hotel. 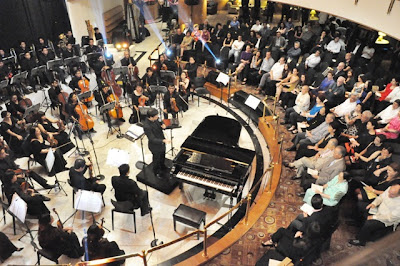 The event was an intimate gathering wherein the orchestra played a wide range of elegant music, including Rachmaninoff’s Rhapsody on a Theme of Paganini, known for its eighteenth variation being used throughout the film Somewhere In Time. Borodin’s Polovetsian Dances, popularly known for its melodies found in songs of the musical Kismet, was also played.

The orchestra also gave an energetic performance of Symphonic Dances from The West Side Story, a 22-minute suite prepared by Leonard Bernstein.

Two musical guests also joined the Philharmonic in serenading the crowd: Micha Haran, the famous principal cellist of the Israel Philharmonic Orchestra, and John Philip Sta. Ana, an 11-year-old boy from Youth Orchestra who recently made waves for his astonishing performance in Chris Botti’s concert. Haran and Sta. Ana performed Cinema Paradiso together and moved the audience to a tumultuous applause.

The audience was pleasantly surprised when the conductor, Maestro Gerard Salonga, invited a volunteer from the audience to come up on stage and conduct the orchestra. Charles Rapaport enthusiastically volunteered and conducted the orchestra through the piece Radetzky March by Johann Strauss Sr.

The ABS-CBN Philharmonic Orchestra has been wonderfully delighting audiences since it was launched early this year and is truly one symphony to watch for. The orchestra will be accompanying the Philippine Ballet Theatre in The Nutcracker on November 10 at the Cultural Center of the Philippines. The orchestra is also gearing up for its Christmas concert. For inquiries, contact Chris Graham at (0917) 824 7633.