Directed by Sam Raimi, imagines the origins of the beloved wizard character, who made his debut in author L. Frank Baum’s first book “The Wonderful Wizard of Oz.” 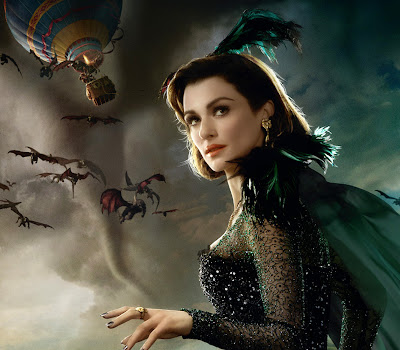 Weisz raves about her time on the project, saying, “What really appealed to me about playing Evanora was that I got to be a bad girl. She has a lot of fun being bad and I think that’s what appealed to me about the character. I loved the script. I thought it was a great imagining of the origin story of the wizard and the witches.”

Commenting on Weisz as Evanora, director Raimi says, “Rachel is a highly regarded actress throughout the world. I was thrilled when she took the role. She can make everything so real, and in this film, which has so many fantastical elements, I needed the actors to deliver very realistic performances to ground the audience in the reality of the place. I love Rachel’s performance as Evanora because she’s got to play it two ways and she does it so successfully.

“She’s got to make you believe that she is the advisor to the king and a good person,” continues Raimi, “somebody who’s just looking out for the welfare of the Emerald City and its inhabitants. Then later you realize that wasn’t just her ethical zeal to do what’s right. Instead, we realize that what we were experiencing was a dark line running through her and that she’s wicked, as wicked as they come. And she is just wonderful and beautiful in that role.”

The director adds, “She brings a great sense of humor to the part. She’s very funny and filled with life in the scenes where she’s wicked.”

Screenwriter Mitchell Kapner, in choosing an original name for the character, points out, “Evanora was never named in Baum’s first book. Because there are no details about the character, we could make it up. So, I chose the name Evanora because the first two syllables sound like ‘evil’ and the name seemed to go well with Theodora, her sister.”

In breathing life into Evanora, “The tricky part was trying to figure out who that character was because there was no source material other than Mitchell’s [Kapner] draft,” says screenwriter David Lindsay-Abaire. “So, you wanted to make the character full. Because nobody knows who Evanora really is, that helped our plot because the character herself is pretending to be one thing and turns out to be something else. That was really good for our story, that you don’t know who she is and what she’s up to.”

“Theodora’s my younger sister who’s good, but also has a streak of wickedness in her because she’s my sister,” Weisz chimes in about the dynamic of the character. “I try to seduce her over to the dark side through different events, which I manipulate because I need her on my side. If I can get Theodora on my side, it would be two against one and I could then beat Glinda, the Good Witch.”

Opening across the Philippines on Thursday, March 7 in IMAX 3D, Digital 3D and regular theaters, “Oz The Great and Powerful” is distributed by Walt Disney Studios Motion Pictures International through Columbia Pictures.