HOSTS: Vice Ganda, Amy Perez, Vhong Navarro, Jhong Hilario
FORMAT: Talent Search
JUDGES: Various singers sit on the 5-member panel every episode
PREMISE: Singers from all over the country try not to be “gonged” for them to advance in the competition
TIMESLOT: Within It’s Showtime, 12-2:30 pm, Mondays-Saturdays

Tawag ng Tanghalan keeps its doors open for outstanding amateur singing talents and remains the premiere talent search in the country. Showrunners are forced to modify the popular format to accommodate aspirants since production is affected by the ongoing health and economic crisis. 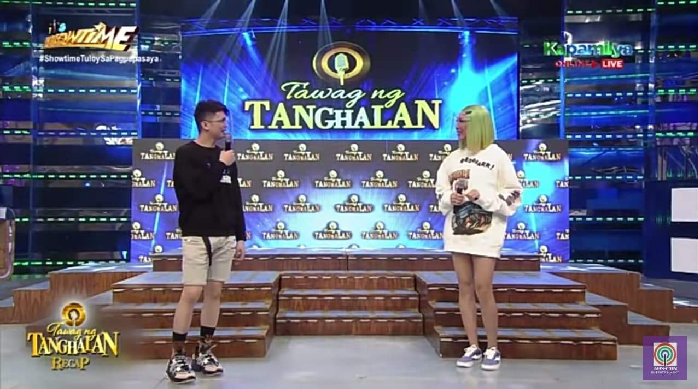 The biggest fear for any contestant to confront in ‘Tawag ng Tanghalan’ must be the possibility of getting ‘gonged’ during a performance. Because that will mean their journey to becoming a popular singer makes a sudden halt. The chance to join the ranks of the country’s best singers remains available for everybody and that the task of fulfilling aspiring singers’ dreams falls to ABS-CBN, even when the network is yet to recover from losing its franchise to operate on free television. But perhaps, more importantly, is that it keeps the beacon of hope burning and alive for every Filipino dreamer, even when most other venues, have opted to take a pause.

Those who are avid followers of ABS-CBN’s flagship noontime show, It’s Showtime, know the drill how the show operates: three contestants respectively representing Luzon, Visayas, and Mindanao sing their hearts out, to become the daily winner. However, if a contestant gets gonged － this happens when the Punong Hurado, or the head judge, signals at the ‘gong master’ three times, after hearing sharps, or off-pitches from the contestant － he or she will be no longer eligible to advance to the next round. The one who emerges as the daily winner will confront the defending champion, for a chance of owning the golden microphone. The defending winner then will have to defend his title five times, for him to advance to the semi-finals. Semi-finalists within a given quarter will have to compete with each other to be among one of two quarter finalists, who will have to face other finalists from the remaining quarters of the year, for them to earn a slot in the grand finals.

This format has been temporarily put on hold by the management, as prospects from Visayas and Mindanao, are now restricted from traveling, and thus can not participate in the live competition. Showrunners now have to settle with only accepting contestants from Luzon, as the current lockdown measures can now allow them to travel, given they have fulfilled tests and other quarantine procedures before being allowed to compete. Two daily contestants compete with each other in two rounds, and the emerging winner advances to the weekly finals. From the weekly finals, two winners will earn a spot in the quarter finals.

Since its relaunch on It’s Showtime, TAWAG NG TANGHALAN has catered different to age groups and has held special editions to accommodate even celebrities, and past grand finalists from all previous seasons, all to keep the door forever open for them. It has already produced three regular edition winners, one kids edition winner, and one celebrity winner. It has also produced many runner-ups who later became successful in the industry. Among its more popular products include Noven Belleza (Season 1 winner), Janine Berdin (Season 2 winner), Elaine Duran (Season 3 winner), Jhon Clyd Talili (TNT Kids winner), Michael Garcia (Celebrity winner), Sam Mangubat, Froilan Canlas, John Mark Saga, and Rachel Gabreza. But perhaps, and one can’t argue, that its biggest and most popular creation, is the three-person boy group, TNT Boys, consist of Mackie Empuerto, Francis Concepcion, and Kiefer Sanchez, who were all runners-up to Jhon Clyd Talili.

The talent search also has some of the biggest, most awarded, and seasoned singers in the business, sitting on its panel of judges. You can imagine how tough their job is, selecting the next big thing in the music industry, and taking part in fulfilling the dream of ordinary singers to join them.

It is admirable enough that ABS-CBN still tries to reach out to its beleaguered faithful audience, who now have to shift to more costly digital platforms, albeit more accessible, but to remain committed to their lifelong mission of serving the Filipino people, through making dreams of ordinary Filipinos come true, is truly a work of virtue. ‘Tawag ng Tanghalan’, a talent show made by and for Filipinos, goes on calling for the country’s biggest voices and remains the biggest stage for our future singing superstars.

TAWAG NG TANGHALAN is a segment of IT’S SHOWTIME which airs on KAPAMILYA CHANNEL and KAPAMILYA ONLINE LIVE.