The government has made a deal with China’s Sinovac firm in terms of COVID-19 vaccines.

In spite of having only 50% efficacy, Presidential Spokesperson Harry Roque urged Filipinos not to be “picky” when looking for a vaccine. 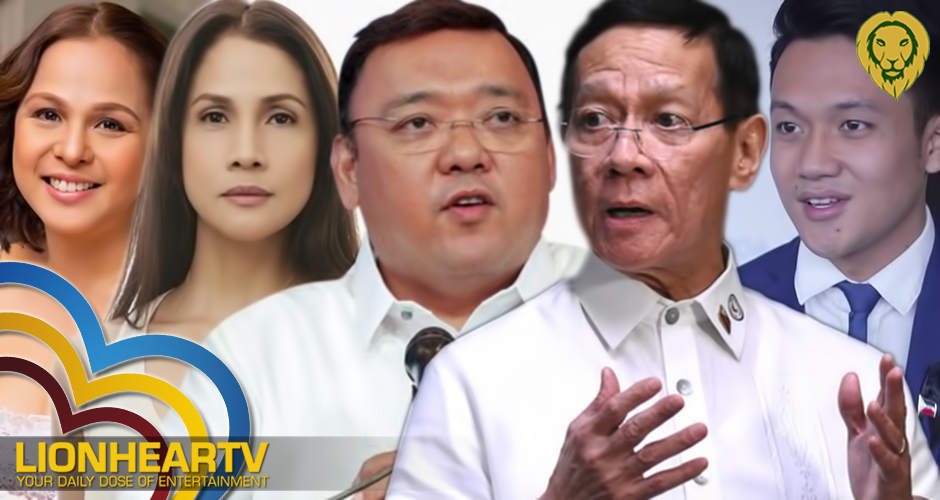 Because of his statement, celebrities criticized the Duterte government’s lack of sympathy towards its citizens.

The funds used to acquire the vaccine came from taxes that Filipinos pay. This was stressed by actress Agot Isidro who wrote on her Twitter account that it is the people’s money. Therefore, it is the right of every individual who contributes to choose what vaccine the government procures. 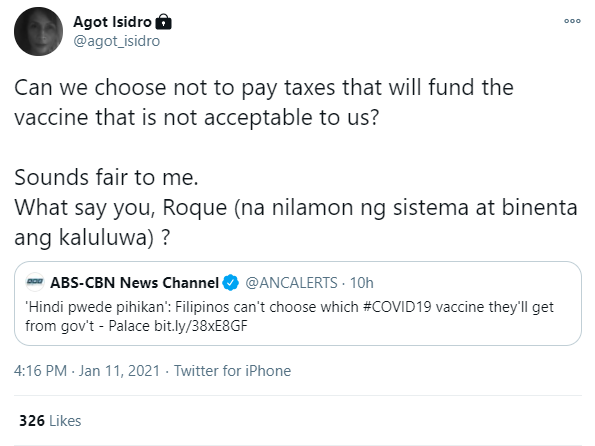 Online personality @krizzy_kalerqui felt that the government is low key saying that Filipinos are beggars. On her Twitter account, she wrote that it is indeed questionable for the government to buy a low efficacy and expensive vaccine rather than a cheaper, high efficacy one.

Nikki Valdez also shared her sentiment regarding the statement of Roque. Sinovac has 73 side effects, not to mention its price, was chosen by the government instead of other vaccines that are way more effective and cheaper.

Another Twitter personality @PinoyAkoBlog aired the reason why Filipinos have the right to be picky is that it is their money. He also added that DOH Sec. Duque and Pres. Duterte should not have chosen Sinovac over other vaccines and then blame citizens for being choosy.

Upon hearing the news, renowned journalist Jeff Canoy could only express his dismay as the government doesn’t want its people to choose their vaccine.

Former adviser to the National Task Force on COVID-19 Dr. Tony Leachon wanted to know the guidelines when selecting the COVID vaccine. In his tweet, he wondered why Sinovac, which was less effective and more expensive than Pfizer and Astra was chosen.

How do we justify government’s order of Sinovac , which is less efficacious 50 % , more expensive vs Pfizer ‘s 95% efficacy rate and Astra 70-90 % efficacy rate ? It would be interesting to know the selection guidelines. https://t.co/8gRI1ty0qg pic.twitter.com/CmMWFmgdQ1

Last year, Duque encouraged Filipinos to trust the selection process in terms of vaccine choice. He also claimed that it would undergo a strict screening process. Still, they settled with Sinovac.

I'm so sorry to say. The Health Secretary Francisco Duque is the best negative advertisement for the coronavirus vaccine.

Moreover, LGUs have chosen AstraZeneca, which is P610 and has 70%-90% efficacy. Only the Department of Health chose Sinovac.

This caused journalist Jules Guiang to made fun of the government who chose an expensive, less effective vaccine over a cheaper, effective one.

Even Davao City, the home of President Rodrigo Duterte, chose AstraZeneca as its coronavirus vaccine.

Blogger Tonyo Cruz also took a swipe at Duque who he perceived as a Sinovac sales agent rather than a Health Secretary.

No major PH city has picked Sinovac. Not even Davao.

Only Duque picked it.

Meanwhile, famous writer Jerry Grácio reminded people to not allow the government to make them fools. He also added that a government that is not pro-people should not be allowed to govern.

Even Senate Majority Leader Miguel Zubiri felt that that the government telling Pinoys not to be picky with the vaccine is unfair.

“That is not a fair assessment. We should give our people[the] choice [which brand of COVID-19 vaccine to get],” Zubiri said.

He also cited AstraZeneca’s vaccine which is way cheaper and was proven to be 90% effective based on human trials. Not only that, but it also secured emergency use authorization (EUA) from the regulatory bodies of first-world countries such as the United States, UK, etc.

He also mentioned Indonesia, which only settled with Sinovac as the vaccine for its citizens aged 18 to 59 years old. This was because, during the trial, it did not show a high efficacy rate among the elderly.

DOH Sec. Duque, in response, has decided that Filipinos will have the right to choose from different brands of COVID-19 vaccine rather than having one option—Sinovac.

When it comes to its safety, a vaccine expert in China dubbed Sinovac as the “most unsafe vaccine in the world” as it can cause 73 side effects.

Although Sinovac was China’s first approved Wuhan coronavirus vaccine, it was criticized by Tao Lina, a Shanghai-based vaccine expert regarding its user guide.

According to Lina, aside from headaches and pain in the injection site, high blood pressure, loss of vision, loss of taste, delayed menstruation, and urinary incontinence were “more likely to occur.”

Moreover, the price of the vaccine is quite expensive as it is priced at P3,629.50 for 2 doses. There is also a fact that it is not as effective as other COVID-19 vaccine brands.

And with the DOH choosing the vaccine with the lowest efficacy rate, it raised more questions than answers.