A grandmother took care of Niña and Niño after their mother left them in the embittered town of Santa Ynez.

Both kids longing for the comfort and protection of a mother, the two siblings wander through the streets of the town to survive until an unfortunate event would make them questioned and or began relying upon faith. 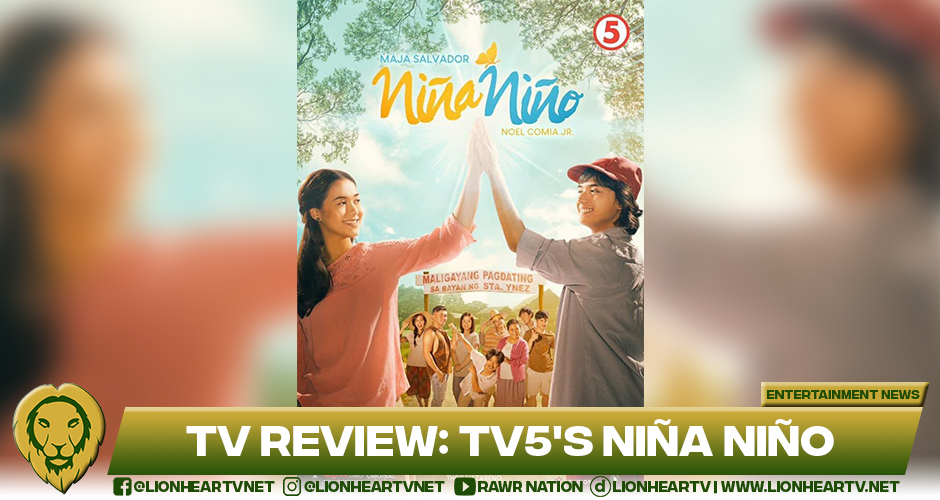 The strong performances of actors and a powerful central anthem may be enough for this new family drama to gather attention. However, its timely arrival when most people are grappling for motivations to survive, during these trying times, may ultimately get viewers into sticking with the show.

The miracle of faith is the main attraction of TV5’s bid to return to powerful heavy dramas. Its timely and socio-political relevance, in our current circumstances, is a big factor to make this series work.

Unlike the recently-concluded ensemble drama, Paano ang Pasko/Paano ang Pangako, however, the heavy emotions are somewhat tamed in, Niña Niño, with the injection of humor, and breezy elements.

In Niña Niño, Maja Salvador plays the street smart, titular role, Niña. Growing up without the presence and protection of her real mother, Niña had to wander through the streets of Santa Ynez, to make a living. She has her lovely, loving grandmother, Lola Belen (played by Ruby Ruiz), to always worry about her. One day, her mother (played by Lilet Esteban) returns, with yet another child for Lola Belen to take care of, and to further make her daughter, Niña, despise her.

Years later, the two siblings, are together navigating their difficult lives, doing mostly trickly gimmicks that may potentially get them behind bars.

Interestingly, the show isn’t the only show bearing the same format and theme, as Kapamilya-produced, Huwag Kang Mangamba, also airs on TV5’s Primetime Todo block. Such may give viewers a genre-fatigue, but luckily, strong performances can be serious showstoppers, in Niña Niño’s case.

Maja Salvador, for example, once again showcased her incredible versatility as she temporarily shifts to fun and easygoing roles, such as Niña. That being said, there are small moments in the series’ first three episodes, alone, that perfectly capture Salvador’s impressing dramatic acting chops, proving her preparedness to immerse into the role, once she confronts her most challenging and emotionally heartbreaking moments, yet.

There is no denying that the actress will singularly pull off such moments, with ease, given the stellar display of her majestic dramatic prowess, in her past TV dramas, including the mammoth ABS-CBN pre-primetime drama, Wildflower, which undoubtedly catapulted her to greater fame.

Niña Niño is poised to deliver a timely message that may be powerful enough to transform lives. While it remains to be seen whether or not the show will topple the limitations presented by TV5’s still limited reach, there is no question of its brimming potential to touch lives—something that will be appreciated, now that most of us are having a shortage of hope.