Netizens expressed their reactions on how Anakalusugan Rep. Mike Defensor felt after being in question for the doctor’s prescription of his Ivermectin he is distributing on Friday, April 30. Is this a reverse scenario of what he did during the ABS-CBN franchise hearing last year? 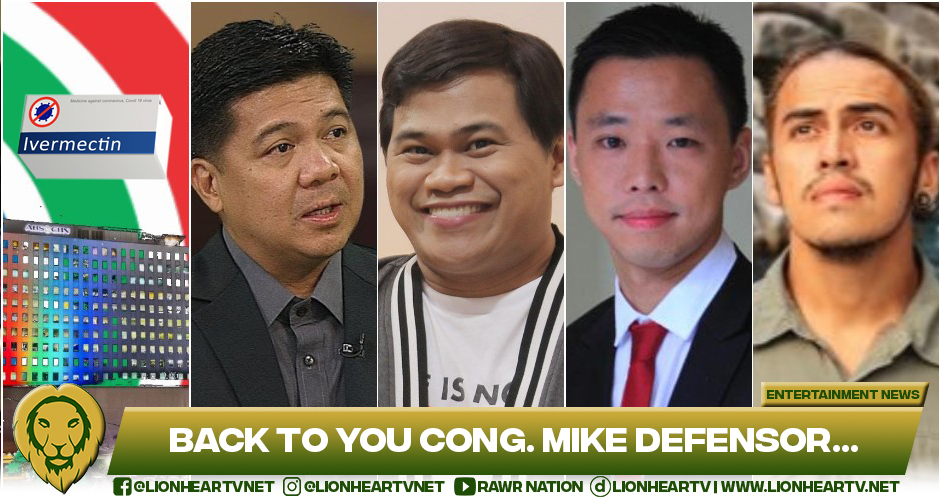 Defensor, who distributed the anti-parasitic drug along with Deputy Speaker Rodante Marcoleta said that the concerns about the prescriptions were “immaterial.”

In the Defensor’s defense, the use of medical paper is unnecessary since the drug was not available anywhere else. Moreover, he argued that the people knew the doctors who prescribed Ivermectin.

He is also willing to fight the FDA (Food and Drug Administration) in court if the agency tries to stop his Ivermectin distribution.

Defensor’s bold statement was met by celebrities and Netizens who did not forget what did during ABS-CBN’s franchise hearing.

Twitter personality France Sajorda questioned the Defensor if the current issue with Ivermectin brought back memories, particularly with the Kapamilya Network’s franchise hearing.

Talent manager-actor, Ogie Diaz remembered how Defensor tried his best to find loopholes against ABS-CBN’s franchise that led to closure in 2020.

With the lawmaker facing a possible lawsuit, Diaz then asked how does it feel to be on the receiving end.

Journalist Barnaby Lo took a swipe at Defensor for attacking his critics.

The reporter recalled that Defensor during ABS-CBN’s franchise hearing was all about “law is law.” But with the drug’s illegalities, the lawmaker is not allowing anyone to point out its legal flaws.

According to Rustia, during the ABS-CBN franchise hearing, the lawmaker was very firm that the Network must adhere to the law. But when it comes to Ivermectin, the congressman is then willing to break the law.

He urged Defensor to follow the government’s requirements in terms of Covid-19 medications. Moreover, he wanted the lawmaker to be more consistent with his principles just like what he had shown against ABS-CBN.

Comply first with government requirements. That's what you advocated with ABS-CBN. We need more consistency. https://t.co/LOqLcf8g06

Some noted that Defensor’s Ivermectin backlash became the consequence of his relentless efforts in finding dirt against the Kapamilya Network.

Screenwriter Anjeli Pessumal pointed out how Marcoleta and Defensor showed no care about the illegality of their distribution of Ivermectin.

However, when it comes to ABS-CBN, the two went all out and demanded “absurd requirements” from the Network.

Considering all the absurd requirements Marcoleta and Defensor demanded from ABS-CBN, they sure don’t care about paperwork when it comes to their illegal distribution of drugs, ano?

Meanwhile, Defensor’s reasoning about prescriptions was rebuked by a pharmacist and Twitter personality Arshie Larga.

He said that the doctor’s information is necessary, even if the medicine, such as Ivermectin, is for free.

The agency never approved Ivermectin for human use. It was only allowed a compassionate special permit and was given to a handful of hospitals.

“Under FDA existing law, the importation, sale, distribution or administration of unregistered drugs or vaccines are prohibited and accordingly punished. Ivermectin is not registered for use by humans because apparently, it is for the parasitic disease of animals,” Guevarra explained during an interview over ANC Headstart.

“In the case of Ivermectin, it is not registered particularly as a drug against COVID-19 and going by the FDA Law on its face. It would appear that the distribution of Ivermectin as a possible treatment for COVID-19 apparently violates the FDA law,” he stressed.

Defensor, along with Marcoleta and Jesus Crispin Remulla grilled ABS-CBN over unfounded allegations resulting in the revocation of its license to operate. They were among the 70 congressmen who voted to reject the franchise renewal application of the Network.