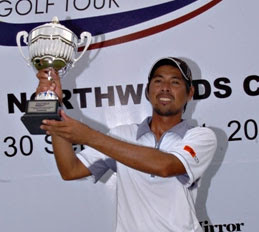 Balls and Studio 23 are among the global television platforms to air the ICTSI Philippine Open. For the first time, the tourney will be aired in over 200 countries.

Que was the last Filipino to rule the Open in 2008. The year before Que’s win, it was Miñoza who claimed the victory for two years in a row.

Besides Miñoza and Que, other Filipino golf veterans such as Mars Pucay, Antonio Lascuña and teenager Miguel Tabuena will also play in the tournament.

Meanwhile, the Dubai Desert Classic, one of the European Tour’s premier events will also be aired on Balls on February 9 and 10, 9p.m. and February 10 and 11, 8p.m.

Asian Tour no. 1 Juvic Pagunsan, who took home the top plum in The Country Club recently, will tee off at the Omega Dubai Dessert, missing the ICTSI Philippine Open. Alvaro Quiros, on the other hand, will be aiming to become the first back-to-back winner of the prestigious event.

Get your daily golf fix on Balls. Balls channel is available on SkyCable Platinum, SkyCable Gold, SkyCable Silver and over 200 quality cable operators nationwide. For more updates, visit www.ballschannel.tv and follow us on facebook.com/BallsChannel and @ballschannel on Twitter