ABS-CBN Corporation, the country’s largest multimedia conglomerate, keeps its stronghold on primetime TV, the most important part of the day for both viewers and advertisers, last April, based on data from the global industry-trusted multinational audience research group Kantar Media.

Kantar Media, which has national panel size of 1,370 homes and 7,535 individuals that are statistically representative of total Philippine TV population, reported that overall, ABS-CBN enjoyed the highest audience share in total day among all TV networks with 35.1% of Philippine households watching its shows. 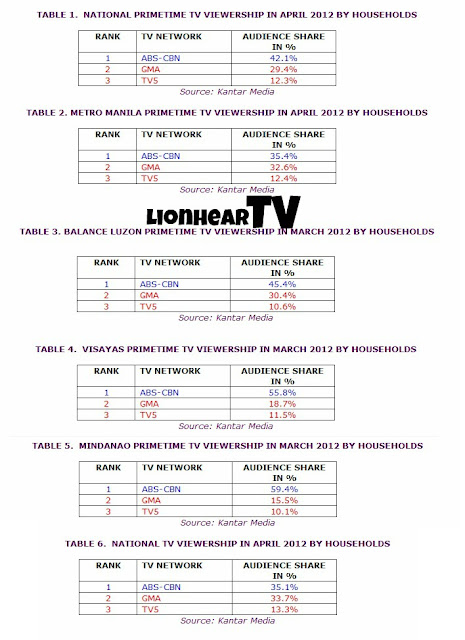 Across other territories, ABS-CBN remains to be the network of choice by most Filipino homes on primetime as it again topped in Balance Luzon (areas in Luzon outside Mega Manila) with 45.4% share vs GMA‘s 30.4%. ABS-CBN ruled the Visayas with 55.8% share vs GMA‘s 18.7% and pulled away further in Mindanao with 59.4% share vs GMA‘s 15.5%.

ABS-CBN’s primetime leadership is still driven by the success of its top-caliber drama series. Its primetime series “Walang Hanggan” topped all programs in Metro Manila, Mega Manila, and national TV ratings. It averaged 34.6% in terms of TV ratings across the country.

Recently concluded “E-Boy” (30.2%) came in second while newly launched royal drama especially shot in Bhutan, “Princess and I,” instantly rose to the third spot with an average national TV rating of 28.8% after debuting last April 16.

“MMK” remains to be the most watched program on weekends and ranking fourth in overall tally with 28.6%, while the 25-year-old flagship primetime news program “TV Patrol” is still the number one newscast in the country with 22.9% in TV ratings.

Based on Kantar Media‘s report, ABS-CBN garnered an average audience share of 35.1% in total day with rival GMA Network placing second with 33.7% share.

ABS-CBN shifted to Kantar Media/TNS after filing a case vs. AGB Nielsen Media Research for failing to comply with its request to investigate alleged cheating and data tampering in TV ratings. The case is still pending in court contrary to claims by GMA, which is not a party to the case, that it has been resolved.