Menu
Search
ABS-CBN News and Current Affairs lets you witness the drama inside the world of Philippine politics in the teleserye-like documentary ”KampanyaSerye,” one of the highlights of ABS-CBN’s Halalan 2013 coverage that aims to educate voters who are set to elect a new batch of leaders this May.

”KampanyaSerye” will tackle and probe the stories behind campaign promises and rhetorics to bring out the issues that matter to the electorate and show the competencies of aspiring leaders. 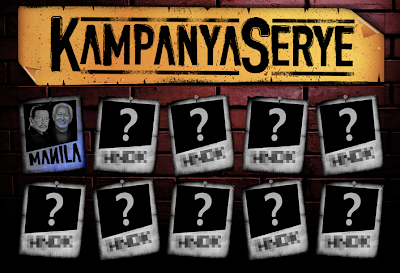 It debuted last week in ”TV Patrol” with Alvin Elchico’s five-part report dubbed as ”Giyera sa Kabisera” that followed the much talked-about battle for the Manila mayoralty post between mayor Alfredo ”Dirty Harry” Lim and former president Joseph ”Asiong Salonga” Estrada. Viewers learned about the humble beginnings of Lim and Estrada in politics, how they first competed for a government seat, why the former best friends are now enemies, and many other angles of the controversial feud.

From frenemies to family feuds, ”KampanyaSerye” opens a brand new story this Monday (Jan 21) about the the ongoing rifts in the Villafuerte family in Ryan Chua’s report titled ”Ama, Anak, Apo.” The Villafuertes of Camarines Sur are currently divided by how they envision Camarines Sur.

Tension further arose when LRay’s son, Migz, chose to run against his grandfather, Luis Sr., for governor. How will this family feud end? Will they choose to severe family ties for the sake of politics?

Dont miss ABS-CBN News and Current Affairs ”KampanyaSerye,” weeknights on ”TV Patrol.” Watch the whole episode on ANC, the ABS-CBN News Channel (SkyCable ch 27), in a special Producer’s Cut version airing every Saturday, 2:30 PM, and every Sunday, 11 AM, and online via www.abs-cbnnews.com/KampanyaSerye. Tweet your thoughts and opinions using the hashtag #KampanyaSerye.