Regal Entertainment Inc. doesn’t just have the enormous talent of Ponce and Marquez, and their beautiful rapport, to make BenXJim work. It also has a bracing story that most audiences won’t have difficulty relating to.

Regal Entertainment’s arrival to the boys’ love scene seems very timely － everybody’s smitten with the genre, almost every entry finds faithful audience who who wouldn’t stay just until the next episode, but until the story gets its much anticipated resolution.

BenXJim has all the makings of the traditional boys’ love (BL) series － it’s light, breezy, doesn’t dwell too much on deeper societal issues, its complications largely mundane. Its lead character, Benjamin (TJ Marquez)－may be Ben, Benny, depends on whoever calls him is desperately trying to deal with living independently, while his mom constantly nags him for not agreeing to live with her in the United States.

He is also persistently bothered by an ex who periodically hijacks his online store’s live stream. But he has other problem, and it’s what makes his thoughts fly. His childhood friend, Jimson (who is also his biggest crush) is coming, and he is losing his head to the thought of seeing him again.

In the series, Ben has just finished college after eight years, which his mom seems to have plenty of time reminding him about, every time she tries to guilt trip him into following them to the US. With strict community quarantine raised, he struggles to turn things around in six months, which is the length of time he asked his mom to allow him to prove he could do it. To meet bills and other financial obligations, he tries online selling. One day, his best friend, told him about a certain Jimson Alcantara who is getting popular on TikTok, asking him to check his profile out. He didn’t have to, but he did anyway. This Jimson is the Jimson he’s had a big crush on since childhood.

Both Ponce and Marquez have quite made memorable projects already. Marquez whose more remarkable projects were made overseas, teams up with Ponce, a popular ABS-CBN star, in a boys’ love series, for the first time. The series marks the second time a major film studio is offering a BL drama, the first being ‘Hello Stranger’ by Blacksheep, a Star Cinema sister studio.

Penned and directed by writer-director Easy Ferrer, BenXJim is a heartwarming tribute to first love, an assured testament to a young romance lost to time only brought back by fate. The series also marks Ferrer’s first stint as a lead director, having worked in various projects as assistant director on Ang Henerasyong Sumuko Sa Love, Mamu and A Mother Too, Just A Stranger, Between Maybes, and To Love Some buddy being the most successful of those projects. Here, his bigger task is to bring the chemistry out of two male leads, and here, to his credit, seems to be an easy task, as the two leads exude irresistible chemistry that transpires through the small screen. Although, Ponce and Marquez, themselves, are partly responsible for making their tandem work.

Like most Pinoy BLs these days, the series takes the pandemic as its backdrop, fully integrating it to the plot as an essential player in the story. Family is also an important element as Ben’s issues with his parents, and his little revolts are given considerable attention, in shedding light upon his quest of surviving living by himself and ultimately proving to his hesitant mother that he can succeed. 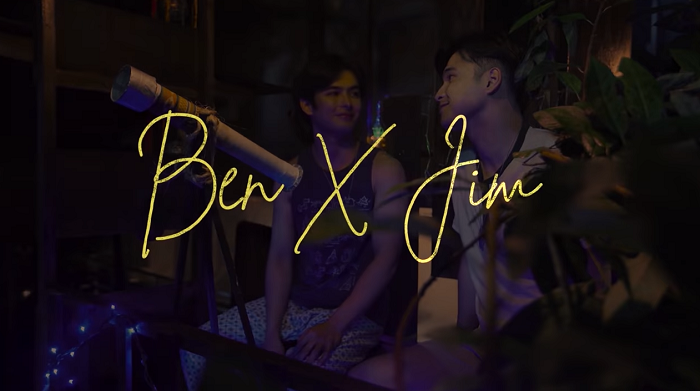 That being said, it’s hard to say whether or not BenXJim will stand head-and-shoulders over its contemporaries, or at least be on a par with prevailing touchstones, as far as the emerging boys’ love genre is concerned. Succeeding episodes are set to guide overall impression among audiences, and ultimately bring Ben and Jim’s story to a satisfying end. The pilot episode, alone, has promising indications that this young romance is poised to go somewhere interesting, its both lighthearted tones and subtly poignant sentiments serving as a red flag that its current breeziness can not be trusted.

Watch the trailer of ‘BenXJim’ below: