Sam Pinto, the Philippines’ sexiest model-actress, is Cesar Montano‘s leading lady on the newest Pinoy action-movie, “Hitman.” It was reported that she will have two hot love scenes with veteran actor Cesar Montano in “Hitman.” The multi-awarded actor and film director revealed that his wife, being one of the casting directors of CM Films, personally chose Sam to be his leading lady. 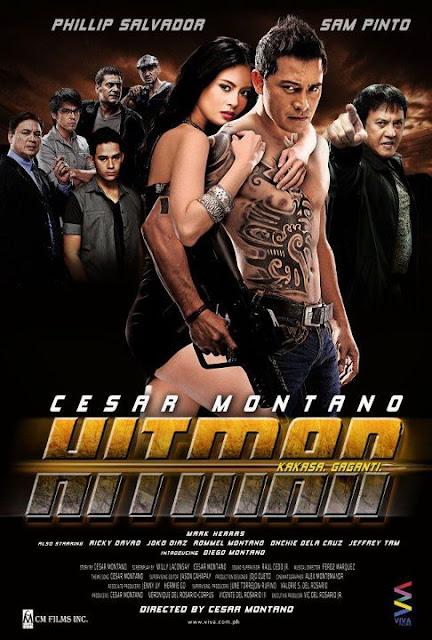 When Gina, a popular print model, met Ben, a guy with an arresting smile and a good sense of humor, she thought she found the perfect guy that will love her for real. Gina met Ben in a coffee shop. Ben bought Gina a cup of coffee after her drink accidentally spilled because of him. Because of Ben’s charm, they easily got along and Gina silently wished they could see each other again that night.

At the bar that same night, Gina and Ben bumped into each other. This time, she fell for him. She was captivated by Ben’s allure and she gave her whole self to him. They made love. But then it’s already too late when she discovered Ben’s true character, and his real motive. To Gina’s surprise, Ben was actually a hitman and he intended to kill her. That their first meeting did not happen by chance. Ben is out to seek justice and avenge the death of his wife and son at the hands of Gina’s father, Mando, his former boss who had ordered to kill him because he already knew too many.

Ben survived after he was left “dead” by Tom, Mando’s “cleaner”. Now he’s back and he wanted to settle the score by killing both father and daughter. Ben had a sudden change of heart after making love to Gina. He decided to kill Mando before taking down Gina. But Tom, who has an axe to grind, went ahead of Ben and killed Mando first. Even worse, when Ben went back to look for Gina, she had already been abducted by Tom.

Ben ran after Tom to get Gina. And after finishing Tom, he tried to kill Gina, too.But Gina knew too well that Ben couldn’t do it to her after that fateful day when they first met. Gina knew that Ben came for Gina not because of revenge, but because just like her, he had already fallen in love with her.

“Hitman” is set to open in theaters this February.

This is the trailer